The animated comedy sequel will arrive on Blu-ray and Blu-ray 3D in January.

In an early announcement to retailers, Sony will be releasing 'Hotel Transylvania 2' on Blu-ray and Blu-ray 3D on January 12.

In this all-new monster comedy adventure, everything seems to be changing for the better at Hotel Transylvania! However, Drac is worried that his adorable half-human, half-vampire grandson, Dennis, isn’t showing signs of being a vampire. So while Mavis is on vacation, things get batty as Drac enlists his monster friends Frank, Murray, Wayne and Griffin to put Dennis through a “monster-in-training” boot camp!

Specs have yet to be revealed, but supplements include: Fifth Harmony Music Video: "I'm In Love With A Monster"; Character Sketch Gallery; Feature Audio Commentary with Adam Sandler, Robert Smigel and Allen Covert; Feature Audio Commentary with Director Genndy Tartakovsky; Sing Along with Monster Scary-Oke!; Deleted Scenes; Make the Scary, Silly Sounds of Hotel Transylvania 2; How to Throw The Ultimate Monster Party; How to Draw Your Favorite Characters; The New Guys: Meet Vlad, Dennis, Kakie; and More...

You can find the latest specs for 'Hotel Transylvania 2' linked from our Blu-ray Release Schedule, where it is indexed under January 12. 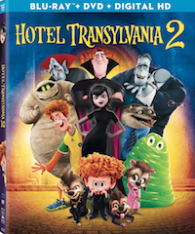 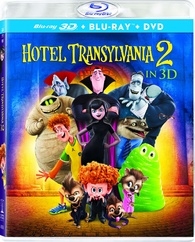