The acclaimed historical drama is planned for Blu-ray in February.

In an early announcement to retailers, Sony says 'Labyrinth of Lies' will be available on Blu-ray on February 16.

Germany 1958. In those years, "Auschwitz" was a word that some people had never heard of, and others wanted to forget as quickly as possible. Against the will of his immediate superior, young prosecutor Johann Radmann (Alexander Fehling) begins to examine the case of a recently identified teacher who was a former Auschwitz guard. Radmann soon lands in a web of repression and denial, but also of idealization. He devotes himself with utmost commitment to his new task and is resolved to find out what really happened. He oversteps boundaries, falls out with friends, colleagues and allies, and is sucked deeper and deeper into a labyrinth of lies and guilt in his search for the truth. But what he ultimately brings to light will change the country forever.

You can find the latest specs for 'Labyrinth of Lies' linked from our Blu-ray Release Schedule, where it is indexed under February 16. 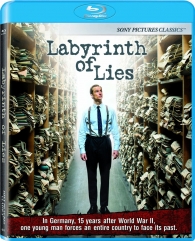