The 1936 comedy classic will be getting the Blu-ray digibook treatment in October.

In an early announcement to retailers, Sony will be releasing 'Mr. Deeds Goes to Town: 80th Anniversary Edition' on Blu-ray on October 4.

When small-town innocent Longfellow Deeds (Gary Cooper) heads to New York to collect a $20 million inheritance, he ends up a target of ridicule thanks to Babe Bennett (Jean Arthur), a cynical reporter whose demeaning stories have made him the joke of the city. So when he discovers his sweet and unassuming new girlfriend is actually the hardboiled Bennett in disguise, a disillusioned Deeds decides to give his fortune away, an act of charity his crooked lawyer will stop at nothing to prevent.

Winner of the 1936 Academy Award for Best Director and now fully restored in 4K, Frank Capra's Mr. Deeds Goes to Town is the quintessential screwball comedy, an irresistible blend of laughter, wit and romance.

You can find the latest specs for 'Mr. Deeds Goes to Town: 80th Anniversary Edition' linked from our Blu-ray Release Schedule, where it is indexed under October 4. 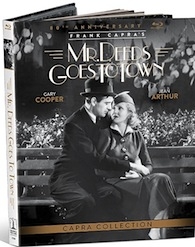