The 1937 adventure film will be getting an 80th anniversary Blu-ray edition this October.

In an early announcement to retailers, Sony is working on 'Lost Horizon: 80th Anniversary Edition' for Blu-ray on October 3.

Celebrate the 80th anniversary of the lavishly produced Frank Capra classic, LOST HORIZON, based on the best-selling novel by James Hilton. Ronald Colman and Jane Wyatt star in this unique journey to the enchanted paradise of Shangri-La, where time stands still. Now restored in 4K and featuring an additional minute of rarely seen footage long missing from the film, LOST HORIZON is a sumptuous experience for lifelong fans and newcomers alike.

Fully restored in 4K and presented in high definition, the Blu-ray is housed within a lavish, limited edition 24-page Digibook, complete with an all-new essay from film historian Jeremy Arnold and rare archival photos from the film. In addition, as part of the restoration, more than a minute of rarely-seen original footage from the film was found and included, making this the most complete cut of the film in existence.

In 2016, the film was selected for inclusion in the United States National Film Registry by the Library of Congress as being "culturally, historically, or aesthetically significant." Originally released in 1937, the film also nominated for seven Academy Awards.

Specs have yet to be revealed, but the release will include the 4K RESTORATION of the film in a Digibook and supplements include: Restoration Audio Commentary; Alternate Ending; Photo Documentary; Restoration: Before and After Comparison; and Theatrical Trailer.

You can find the latest specs for 'Lost Horizon: 80th Anniversary Edition' linked from our Blu-ray Release Schedule, where it is indexed under October 3. 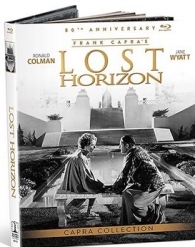