The horror thriller is now up for pre-order.

In an early announcement to retailers, Sony is preparing 'Don't Breathe' for Blu-ray.

Rocky, a young woman wanting to start a better life for her and her sister, agrees to take part in the robbery of a house owned by a wealthy blind man with her boyfriend Money and their friend Alex. But when the blind man turns out to be a more than he seems, the group must find a way to escape his home before they become his newest victims.

You can find the latest specs for 'Don't Breathe' linked from our Blu-ray Release Schedule, where it's indexed under PENDING. 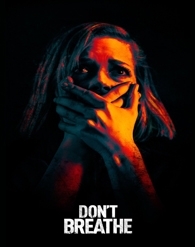 Discs mentioned in this article: (Click for specs and reviews)
Don't Breathe (Blu-ray)