The critically acclaimed horror flick is planned for Blu-ray in November.

As previously reported, Sony is working on 'Don't Breathe' for Blu-ray, and now the release date has been set for November 29.

Hailed as "the best American horror film in twenty years" (Jim Hemphill, "Filmmaker Magazine") and Certified Fresh on Rotten Tomatoes (87%), Don't Breathe debuted at #1 at the box office and remained in the top spot for two weekends in a row. The film follows a group of thieves who break into a blind man's home thinking they'll get away with the perfect crime. When the blind man reveals a dark side, the trio quickly discovers they were dead wrong.

You can find the latest specs for 'Don't Breathe' linked from our Blu-ray Release Schedule, where it is indexed under November 29. 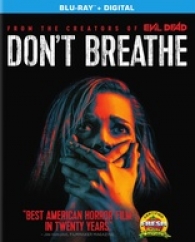