'Deliver Us From Evil' Dated for Blu-ray

In an early announcement to retailers, Sony will be releasing 'Deliver Us From Evil' on Blu-ray on October 28.

In 'Deliver Us From Evil', New York police officer Ralph Sarchie (Eric Bana), struggling with his own personal issues, begins investigating a series of disturbing and inexplicable crimes. He joins forces with an unconventional priest (Edgar Ramirez), schooled in the rituals of exorcism, to combat the frightening and demonic possessions that are terrorizing their city. Based upon the book, which details Sarchie's bone-chilling real-life cases.

Specs haven't been revealed yet, but supplements include: Illuminating Evil: The Making of Deliver Us From Evil; The Demon Detective: "The Work" and the real Ralph Sarchie; The Two Sargeants; and Deliver us from Demons.

You can find the latest specs for 'Deliver Us From Evil' linked from our Blu-ray Release Schedule, where it is indexed under October 28. 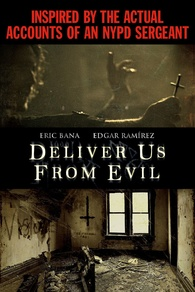