The action/horror film heads to Blu-ray in December.

In an early announcement to retailers, Sony says 'Dead Rising: Endgame' will hit Blu-ray on December 6.

After narrowly escaping a zombie quarantine, Chase (Jesse Metcalfe) can't shake the guilt of having left a trusted colleague behind. Now, as he heads back into the quarantine to expose the architects of the outbreak, he will uncover a secret more evil than he could have imagined. With mass annihilation looming, Chase—along with a group of dubious allies—slices, hacks and bludgeons his way through the zombie hordes that plague the abandoned city. Our heroes will have to confront their most gruesome nightmares in order to save millions of innocent lives, including their own.

You can find the latest specs for 'Dead Rising: Endgame' linked from our Blu-ray Release Schedule, where it is indexed under December 6. 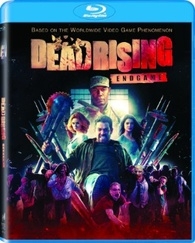