The war drama will leave treadmarks on Blu-ray in January.

In an early announcement to retailers, Sony will be releasing 'Fury' on Blu-ray on January 27.

April, 1945. As the Allies make their final push in the European Theatre, a battle-hardened army sergeant named Wardaddy (Brad Pitt) commands a Sherman tank and her five-man crew on a deadly mission behind enemy lines. Outnumbered and outgunned, and with a rookie soldier thrust into their platoon, Wardaddy and his men face overwhelming odds in their heroic attempts to strike at the heart of Nazi Germany.

Specs have yet to be revealed, but supplements will include deleted scenes and three featurettes: Director's Combat Journal, Armoured Warriors, and Taming The Beast.

You can find the latest specs for 'Fury' linked from our Blu-ray Release Schedule, where it is indexed under January 27. 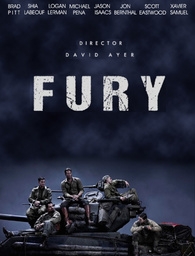