The crime-comedy sequel will be available on both formats this summer.

In an early announcement to retailers, Sony is preparing 'T2: Trainspotting' for Blu-ray and Ultra HD Blu-ray on June 27.

First there was an opportunity......then there was a betrayal. Twenty years have gone by. Much has changed but just as much remains the same. Mark Renton (Ewan McGregor) returns to the only place he can ever call home. They are waiting for him: Spud (Ewen Bremner), Sick Boy (Jonny Lee Miller), and Begbie (Robert Carlyle). Other old friends are waiting too: sorrow, loss, joy, vengeance, hatred, friendship, love, longing, fear, regret, diamorphine, self-destruction and mortal danger, they are all lined up to welcome him, ready to join the dance.

Specs have yet to be revealed, but supplements include: 20 Years in the Making: A Conversation with Danny Boyle and the Cast featurette; Commentary with Boyle and screenwriter John Hodge; and Deleted Scenes.

You can find the latest specs for 'T2: Trainspotting' linked from our Blu-ray Release Schedule, where it is indexed under June 27. 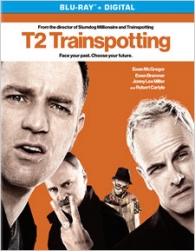 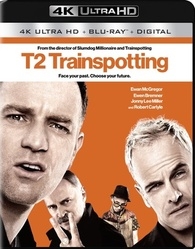