The critically-acclaimed drama is headed for Blu-ray next month.

In an early announcement to retailers, Sony will be releasing 'Whiplash' on Blu-ray on February 24.

Andrew Neiman (Miles Teller) is an ambitious young jazz drummer, single-minded in his pursuit to rise to the top of his elite east coast music conservatory. Plagued by the failed writing career of his father, Andrew hungers day and night to become one of the greats. Terence Fletcher (J.K. Simmons), an instructor equally known for his teaching talents as for his terrifying methods, leads the top jazz ensemble in the school. Fletcher discovers Andrew and transfers the aspiring drummer into his band, forever changing the young man's life. Andrew's passion to achieve perfection quickly spirals into obsession, as his ruthless teacher continues to push him to the brink of both his ability and his sanity.

Specs have yet to be revealed, but supplements include: Audio Commentary with Writer/Director Damien Chazelle and J.K. Simmons; An Evening at the Toronto International Film Festival with Miles Teller, J.K. Simmons and Damien Chazelle; Timekeepers - Famous drummers discuss their craft and passion for drumming; Whiplash Original Short Film with Optional Commentary; and Deleted Scene with Optional Commentary.

You can find the latest specs for 'Whiplash' linked from our Blu-ray Release Schedule, where it is indexed under February 24. 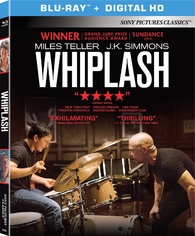