The Best Foreign Language Film Oscar-nominee from Argentina arrives on Blu-ray in June.

In an early announcement to retailers, Sony says 'Wild Tales' will be available on Blu-ray on June 16.

Wild Tales is a fresco of rage, fury, deception and revenge. Made up of six stories, it is an entertaining and jaw-dropping film about people crossing the line into madness when faced with perceived injustice. A lovers betrayal, a return to the repressed past, and the violence woven into everyday encounters drive the characters to lose control and cross the line that divides civilization and barbarism.

Specs have yet to be revealed, but supplements include: Wild Shooting: Creating the Film - A behind-the-scenes look at the creation of the Oscar nominated film and An Evening at the Toronto International Film Festival with Damián Szifron - Writer/Director Damián Szifron participates in a Q & A session at the festival screening of Wild Tales.

You can find the latest specs for 'Wild Tales' linked from our Blu-ray Release Schedule, where it is indexed under June 16. 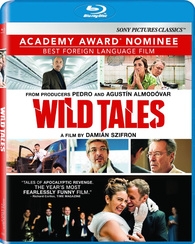