As previously reported, Sony will be releasing 'Pixels' on Blu-ray and Blu-ray 3D sometime later this year, and now the date has been set for October 27.

When aliens misinterpret video-feeds of classic arcade games as a declaration of war against them, they attack the Earth using games like PAC-MAN, Donkey Kong, Galaga, Centipede and Space Invaders as models for their various assaults. President Will Cooper (Kevin James) has to call on his childhood best friend, 80s video game champion Sam Brenner (Adam Sandler) to lead a team of old-school arcaders (Peter Dinklage and Josh Gad) to defeat the aliens and save the planet.

Blu-ray exclusives include: The Creator of the Machine - PAC-MAN creator Toru Iwatani was on-set and had a cameo, we hear from him about his experience and his take on PIXELS; The Space Invader - The winner of an arcade contest had a walk on role in the film; PAC-MAN - A detailed look at the PAC-MAN action sequence. From Mini Coopers and stunts to visual effects, see how PAC-MAN chomps his way into real life; Donkey Kong - See the cast perform stunts on a giant reconstruction of the classic platform game and watch as Donkey Kong goes from bits to BIG; Centipede - The giant insect attack was the creation of visual and special effect planning as well as the patience of countless performers; and Galaga - This 80's arcade favorite leads the alien invasion, take an inside look at the attack on Guam.

You can find the latest specs for 'Pixels' linked from our Blu-ray Release Schedule, where it's indexed under October 27. 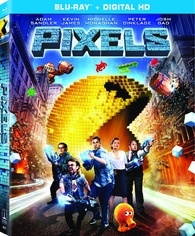 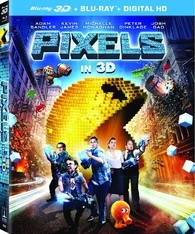