The 2016 holiday drama comes to home video next month.

Sony is set to release 'Believe' for Blu-ray on April 11.

For years, the small town of Grundy, Virginia has relied on the Peyton family to provide the highlight of the year—the annual Christmas pageant. When Matthew Peyton (Ryan O'Quinn) inherits the family business, the responsibility of the Christmas pageant also falls on his shoulders. But as financial hardships fall on the town, Matthew finds himself overwhelmed. As his business profits plummet and his workers begin to strike, Matthew is forced to make a decision between selling the family business and canceling the beloved pageant or sticking out hardships despite his rapidly declining popularity in the community. Through chance events, Matthew meets Clarence (Isaac Ryan Brown), a boy who believes in miracles, and his mother Sharon (Danielle Nicolet). His newfound friends impact Matthew's life in a way he never thought possible and teach him to believe and give faith a chance.

The Blu-ray will feature 1080p video, lossless 5.1 audio, and supplements include Deleted Scenes, Outtakes, and Faith is Everywhere - The Making of Believe.

You can find the latest specs for 'Believe' linked from our Blu-ray Release Schedule, where it is indexed under April 11. 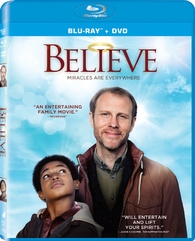