The 'Breaking Bad' spinoff's second season is coming to Blu-ray in November.

As previously reported, Sony is preparing 'Better Call Saul: The Complete Second Season' for Blu-ray, and now the date has been set for November 15.

Season one found Jimmy (Bob Odenkirk) stumble upon a large class-action lawsuit, which led to a promising job opportunity at a large firm. Having arrived at a fork in the road, will Jimmy take the straight and narrow path with a safe corporate job or will he fall back into his “Slippin’ Jimmy” con-artist ways?

You can find the latest specs for 'Better Call Saul: The Complete Second Season' linked from our Blu-ray Release Schedule, where it's indexed under November 15. 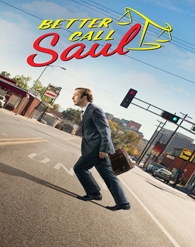