The comedy drama is headed for Blu-ray in May.

In an early announcement to retailers, Sony is preparing 'Creative Control' for Blu-ray on May 10.

In near-future Brooklyn, David is a tech-obsessed advertising executive working on a campaign for augmented reality glasses. Jealous of his best friend Wim's charmed life and obsessed with his beautiful girlfriend Sophie, David uses the glasses to create a life-like avatar of her -- but he is not prepared for what happens when the line between reality and virtual reality begins to blur.

Specs haven't been revealed yet, but the Blu-ray will feature deleted scenes and has a suggested list price of $26.99.

You can find the latest specs for 'Creative Control' linked from our Blu-ray Release Schedule, where it is indexed under May 10. 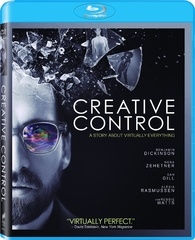