The Academy Award-winning film is coming to Blu-ray in May.

In an early announcement to retailers, Sony is preparing The Salesman for Blu-ray on May 2.

Forced to leave their apartment due to a dangerous construction project in a neighboring building, a young Iranian couple moves to the center of Tehran where they become embroiled in a life-altering situation involving the previous tenant. Directed by Asghar Farhadi, who also helmed the Oscar-winning feature A Separation.

Specs have not been announced yet, but supplements will include A Conversation With Writer-Director Asghar Farhadi.

You can find the latest specs for The Salesman linked from our Blu-ray Release Schedule, where it's indexed under May 2. 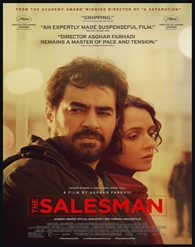 Discs mentioned in this article: (Click for specs and reviews)
The Salesman (Blu-ray)