The acclaimed action epic returns to Blu-ray in October.

In an early announcement to retailers, Sony will be releasing 'Crouching Tiger, Hidden Dragon: 15th Anniversary Edition' on Blu-ray on October 18.

Named "Best Picture of the Year" by over 100 critics nationwide! Two master warriors (Chow Yun Fat and Michelle Yeoh) are faced with their greatest challenge when the treasured Green Destiny sword isstolen. A young aristocrat (Zhang Ziyi) prepares for an arranged marriage, but soon reveals her superior fighting talents and her deeply romantic past. As each warrior battles for justice, they come face to face with their worst enemy - and the inescapable, enduring power of love.

Nominated for 10 Academy Awards® and winner of four, including Best Foreign Language Film* CROUCHING TIGER, HIDDEN DRAGON is presented with an all-new 4K restoration and exclusive Dolby Atmos® sound on both the Blu-ray and the 4K Ultra HD releases. The film was fully restored from the 35mm original camera negative, thereby utilizing in 4K the full resolution, detail and color depth inherent in the film. 4K Ultra HD brings the full power of this restoration into the home, featuring four times the resolution of high definition, high dynamic range (HDR)--which produces brilliant highlights, vibrant colors and greater contrast on compatible displays--and Dolby Atmos audio, remixed specifically for the home theater environment, delivering captivating sound that places and moves audio anywhere in the room, including overhead. The Blu-ray will also utilize this new restoration at HD resolution along with the Dolby Atmos audio.

The new Blu-ray will be available as part of the Supreme Cinema Series, a premium, limited edition collection befitting beloved cinematic favorites and modern classics, featuring collector’s packaging with the acrylic “Clear Case.” The edition also includes a 24-page booklet of rare photos and behind-the-scenes detail that will only be available while supplies last. There will also be a Supreme Cinema Series “Clear Case” edition with the 4K Ultra HD disc, available exclusively at Amazon while supplies last.

You can find the latest specs for 'Crouching Tiger, Hidden Dragon: 15th Anniversary Edition' linked from our Blu-ray Release Schedule, where it is indexed under October 18. 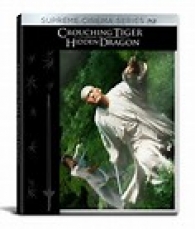