The acclaimed action epic returns to Blu-ray in October.

In an early announcement to retailers, Sony will be releasing 'Crouching Tiger, Hidden Dragon: 15th Anniversary Edition' on Blu-ray on October 18.

Named "Best Picture of the Year" by over 100 critics nationwide! Two master warriors (Chow Yun Fat and Michelle Yeoh) are faced with their greatest challenge when the treasured Green Destiny sword isstolen. A young aristocrat (Zhang Ziyi) prepares for an arranged marriage, but soon reveals her superior fighting talents and her deeply romantic past. As each warrior battles for justice, they come face to face with their worst enemy - and the inescapable, enduring power of love.

Specs and supplements haven't been revealed yet, but the release is expected to be mastered in 4K and the suggested list price for the Blu-ray is $19.99.

You can find the latest specs for 'Crouching Tiger, Hidden Dragon: 15th Anniversary Edition' linked from our Blu-ray Release Schedule, where it is indexed under October 18. 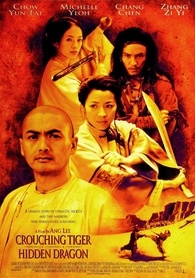