The first season of the riveting series starring Dominic Cooper as man of the cloth Jesse Custer is planned for Blu-ray in October.

In an early announcement to retailers, Sony will be releasing 'Preacher: Season One' on Blu-ray on October 4.

The darkly comedic, hard-hitting, supernatural thrill-ride follows Texas preacher Jesse Custer (Dominic Cooper, TV's "Agent Carter," Captain America: The First Avenger) who, after a supernatural event at his church, is thrust into a crazy world populated by a cast of characters from Heaven, Hell and everywhere in between. Along with his hell-raising ex-girlfriend, Tulip (Ruth Negga, World War Z, TV's "Agents of S.H.I.E.L.D."), and Irish vampire Cassidy (Joseph Gilgun, This is England, TV's "Emmerdale"), Jesse embarks on a wild, dark journey of discovery and revenge unlike any other.

Based on the cult hit comic book series, Preacher is the edgy story of Jesse Custer (Dominic Cooper), a conflicted preacher in a small Texas town who is inhabited by a mysterious entity that allows him to develop a highly unconventional power. Jesse, along with his fearless sidekicks, Cassidy (Joseph Gilgun), an Irish vampire, and Tulip (Ruth Negga), a trained marksman, embark on a wild, dark journey that is unlike any other.

Specs have yet to be revealed, but supplements include: Deleted & Extended Scenes; "The Unfilmable Pilot"; and "The Stunts of Preacher". Blu-ray exclusives include: Gag Reel; "Chainsaw Fight Breakdown"; and "Behind the Killing Machine: Saint of Killers".

You can find the latest specs for 'Preacher: Season One' linked from our Blu-ray Release Schedule, where it is indexed under October 4. 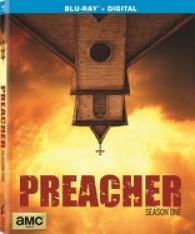