Celebrate the 35th anniversary of the classic Jim Henson series on Blu-ray this September!

In an early announcement to retailers, Sony says 'Fraggle Rock: The Complete Series' will be available on Blu-ray on September 25.

Join Gobo, Mokey, Wembley, Boober and Red in celebrating the 35th anniversary for Fraggle Rock, from iconic creative mastermind Jim Henson. Catch all 96 episodes – now remastered in high definition – with this jam-packed Blu-ray™ set, featuring hours of special features and a behind-the-scenes scrapbook with an introduction from Uncle Travelling Matt!

Described by its legendary creator Jim Henson as "a high-energy, raucous musical romp," Fraggle Rock stars a cast of puppet creatures called Fraggles, quirky cave-dwellers who live in an underground world alongside their industrious green neighbors, the Doozers, and a family of enormous Gorgs. The series follows the fun adventures of the furry subterranean creatures and features a unique mix of music from all genres including folk, blues, gospel, country and rock, all while embracing themes of friendship, tolerance, diversity and caring for the planet.

All 96 episodes in the 12-disc set from the show's four seasons are FULLY REMASTERED IN HIGH-DEFINITION and presented with lossless audio on Blu-ray. This set is also available in special limited edition "scrapbook" packaging, featuring rare behind the scenes photos and an introduction from Uncle Travelling Matt.

Fraggle Rock: The Complete Series is loaded with bonus content on Blu-ray, including the all-new "Fraggle Music Celebration," where viewers can enjoy their favorite Fraggle songs with sing-alongs for every episode (100 songs!) or hit shuffle and let the Fraggles choose the songs. Also newly included on the Blu-ray set is a fun and rare personal glimpse behind the curtain with creator Jim Henson, plus a 1993 throwback segment from "The Today Show" featuring Uncle Travelling Matt, along with more than eight hours of archival special features, including interviews with the cast and crew, featurettes, promos and the complete "Fraggle Rock: The Animated Series." 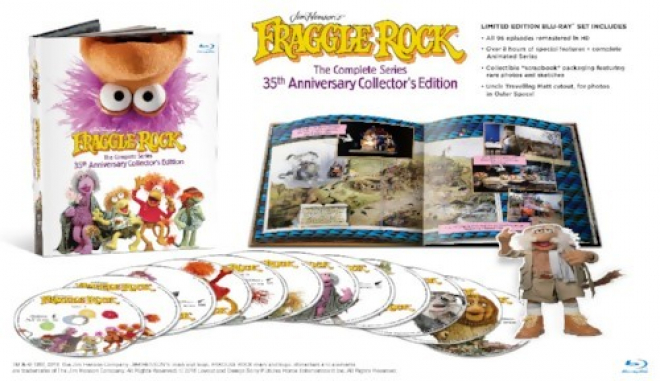 Based on the highly acclaimed live-action series, Fraggle Rock gets animated! The fun-loving Fraggles – Gobo, Red, Mokey, Wembley, Boober, and all their friends – explore new horizons, frolicking about in the wondrous maze of colorful caverns that make up the fantastic, fairy-tale landscape that the Fraggles call home. From Mokey’s search for the most Fragglish Fraggle to a journey down into the Deep Deep Dark Dark Deep Dark Pit to rescue Boober’s lucky Rag-Fraggle, experience Fraggle Rock like never before!

The 12-disc set has been newly remastered for Blu-ray and supplements include:

NEW: Fraggle Music Celebration - Celebrate your favorite Fraggle songs with sing-alongs for every episode or hit shuffle and let the Fraggles choose for you!
NEW: Life on Set: Moments with Jim Henson
NEW 1993 "The Today Show" Segment featuring Uncle Travelling Matt
Down at Fraggle Rock: Behind the Scenes (48-minute version)
Fraggle Songs & Doozer Music
Interviews with Fraggle Rock Creators and Puppeteers
Seasons 2, 3 and 4 Overviews
Docs and Sprockets
"All Around the World" Music Video
Travelling Matt
20 Travelling Matt Segments
Special Tribute to Jerry Juhl
Scared Silly: Art Imitating Life
Production Design Featurette
Electro-Mechanical Puppetry
Doozer Design
How the Trash Heap Came to Be
Gorg Design
Interviews with Michael Frith, Kathy Mullen and Gerry Parkes
HBO Promos
You Cannot Leave the Magic: Excerpts from the Last Day of Shooting
Dance Your Cares Away: The Evolution of the Theme Song
The Inner Gorg: An Interview with the Performers Inside the Costumes
Let the Music Play: An Interview with Phil Balsam and Dennis Lee
Celebrating Fraggle Rock: Excerpts from the Wrap Party
Designing the Puppets: An Interview with the Puppet Makers
Directing the Fraggles: An Interview with Eric Till and George Bloomfield
Additional Interviews: Dennis Lee with Mokey, Jerry Juhl with Gobo, Jocelyn Stevenson with Red and Mokey, Faz Fazakas with Cotterpin Doozer, and A Minute with Travelling Matt

You can find the latest specs for Fraggle Rock: The Complete Series linked from our Blu-ray Release Schedule where it is indexed under September 25.