Tessa Thompson and Chris Hemsworth will protect both home video formats from alien invaders this September.

Sony says Men in Black: International will be available on 4K Ultra HD Blu-ray and Blu-ray on September 3.

The Men in Black have always protected the Earth from the scum of the universe. In this new adventure, they tackle their biggest, most global threat to date: a mole in the Men in Black organization. Written by Art Marcum & Matt Holloway. Based on the Malibu Comic by Lowell Cunningham.

"Neuralyzer: Like It Never Even Happened": As NOT seen on Alien TV, order now to get your very own Neuralyzer and erase life's embarrassing moments like a pro.

"New Recruits, Classic Suits": Anchored by the delightful chemistry between Tessa Thompson and Chris Hemsworth and supported by icons like Emma Thompson & Liam Neeson, the cast of MIB International is truly out of this world!

"Let's Do This! Inside the Action & Stunts": MIB International is packed with action and stunts, go behind the scenes with the team to see how they pulled it off.

"Look Right Here: Gadgets, Weapons, & Rides": From the iconic Neuralyzer to a tricked out Jag, check out the amazing arsenal of gadgets, weapons and vehicles.

You can find the latest specs for Men in Black: International linked from our 4K and Blu-ray Release Schedules, where it is indexed under September 3. 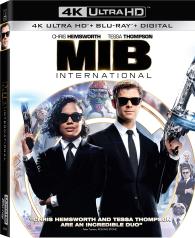 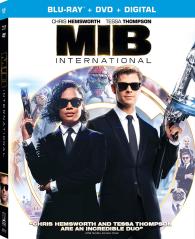