SPIDER-MAN: INTO THE SPIDER-VERSE Dated and Detailed for 4K Ultra HD Blu-ray and Blu-ray

The Oscar nominee and Golden Globe Winner for Best Animated Feature Film will be swinging to both formats next month.

Sony says Spider-Man: Into the Spider-Verse will be available on 4K Ultra HD Blu-ray and Blu-ray on March 19 and on Digital February 26.

Spider-Man: Into the Spider-Verse, a film that has grossed over $350 million in theaters worldwide to date, introduces Brooklyn teen Miles Morales, and the limitless possibilities of the Spider-Verse, where more than one can wear the iconic mask. “One of the most rewarding experiences in recent months has been to hear that children are telling their parents that they see themselves in Miles, or that they want to grow up to be like Spider-Gwen, anyone can be a hero. Thats why we made this film, and we hope that feeling of empowerment is something that both audiences young and old can take away,” say Directors Bob Persichetti, Peter Ramsey, and Rodney Rothman.

The releases will feature a Dolby Atmos soundtrack and supplements will include:

•    We Are Spider-Man: Exploring and celebrating one of the key themes of the film, We Are Spider-Man takes a deep dive into the diversity of the characters and aspirational core that any person from any gender or cultural background can wear the mask.

•    Spider-Verse: A New Dimension: With a stunning visual style and state of the art animation designed to take the viewer into the pages of a comic, Spider-Man: Into The Spider-Verse is not only a love letter to comic books but a groundbreaking take on the super hero genre. Hear from the artists and filmmakers who pushed the boundaries of the artform as they discuss their journey.

•    The Ultimate Comics Cast: Enjoy this showcase of all of the fan favorite characters featured in the Spider-Verse and the spectacular cast who were chosen to bring them to life.

•    A Tribute to Stan Lee & Steve Ditko: Celebrate the amazing legacy and powerful spirit of the creators of Spider-Man.

•    Designing Cinematic Comics Characters: A breakdown of all aspects of the character design including costume, movement in animation, and distinct powers for each character.
o    Heroes & Hams: Meet the amazing Spider-people of the Spider-Verse.
o    Scorpions and Scoundrels: Explore the classic villains who wreak havoc on the Spider-Verse.

•    Alternate Universe Mode: In this all-new viewing experience, discover alternate scenes, plotlines, characters, and more with the filmmakers as your guide.

•    All-New Original Short “Spider-Ham: Caught In a Ham” It's another normal day for Peter Porker, a.k.a. the Spectacular Spider-Ham, fighting bad guys and loving hot dogs, until a mysterious portal starts messing with the very fabric of his cartoon reality.

You can find the latest specs for Spider-Man: Into the Spider-Verse linked from our 4K and Blu-ray Release Schedules, where it is indexed under March 19. 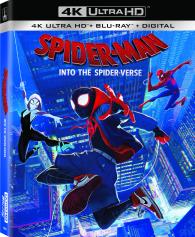 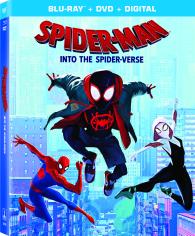