The action-packed sequel is already up for pre-order on both formats at Amazon.

As previously reported, Sony's Spider-Man: Far From Home is swinging to 4K Ultra HD Blu-ray and Blu-ray in the near future, and now the date has been set for October 1. The digital releases will be available on September 17.

Tom Holland returns as everyone’s favorite web-slinger in Spider-Man: Far From Home, the next chapter after Spider-Man: Homecoming. Our friendly neighborhood wall-crawler decides to join his best friends Ned, MJ, and the rest of the gang on a European vacation. However, Peter’s plans to leave super heroics behind for a few weeks are quickly scrapped when he begrudgingly agrees to help Nick Fury uncover the mystery of several elemental creature attacks! Spider-Man and Mysterio (Jake Gyllenhaal) join forces to fight the havoc unleashed across the continent but all is not as it seems.

The releases will feature a lossless 7.1 soundtrack (Dolby Atmos on the 4K release) and supplements include:

•    New Original Short, Peter’s To – Do - List: Peter has a few errands to run before he can leave on his class trip.

•    Stepping Up: Explore how Spider-Man was introduced in the MCU, the ways Tom Holland transformed the character of Peter Parker, and what the future holds for Spider-Man.

•    Suit Up: The suit doesn't make the hero - but it does play a big role in who they are and who they can become. This piece examines all of Peter's different suits in the movie, and with behind the scenes footage, we see why some suits are better than others.

•    Far, FAR, Far from Home: The film's illustrious locations serve story points and establish tone, but they're also amazing to travel to! Hear from the cast on their experiences filming on-location.

•    It Takes Two: A special look at the chemistry between Jon Watts and Tom Holland.

•    The Ginter-Riva Effect: A look at the villain sub-plot and how William Ginter-Riva ties Spider-Man: Far From Home all the way back to the beginning of the MCU.

•    Thank You, Mrs. Parker: A look at Marisa Tomei's reimagining of Aunt May, from Homecoming to Far From Home.

•    The Brother’s Trust: A quick look into some of the amazing work Tom Holland and his brothers have done through their charity, The Brothers Trust.

•    The Jump Off: Interviews with the cast & crew take us through all of the amazing stunts of Far From Home.

•    Now You See Me: We examine the evolution of Mysterio and why Jake Gyllenhaal was the perfect fit for the role.

•    Stealthy Easter Eggs: Allow E.D.I.T.H. to reveal some of the hidden Easter Eggs you may have missed!

•    Select Scene Pre – Vis: A side by side comparison of the Pre-Vis with the film

You can find the latest specs for Spider-Man: Far From Home linked from our 4K and Blu-ray Release Schedules, where it is indexed under October 1. 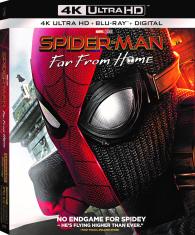 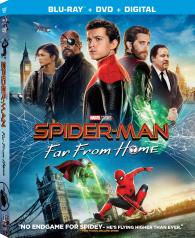