The horror series is now available for pre-order.

In an early announcement to retailers, Shriek Show is preparing 'Flesh for the Beast: Tsukiko's Curse' for Blu-ray on September 22.

'Flesh for the Beast: Tsukiko's Curse' is a six-episode series about a team of paranormal investigators who probe and explore the dark occult fringes of reality. The trio consists of Tsukiko, a mysterious Japanese girl and highly sensitive psychic; Parsons, a skeptical science-based researcher with an obsession for debunking the paranormal and Fortune, a free spirit and new-age mystic with just enough science to keep her grounded. Together they encounter vampires, ghosts, demons, shape-shifters and other entities known and unknown. Each episode will feature strange, eccentric characters, eerie atmospherics and an unsettling mix of horror, gore and eroticism. The show will concoct a frightful brew of J-Horror and Reality horror thrills.

You can find the latest specs for 'Flesh for the Beast: Tsukiko's Curse' linked from our Blu-ray Release Schedule, where it's indexed under September 22. 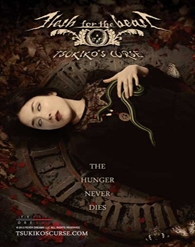 Discs mentioned in this article: (Click for specs and reviews)
Flesh for the Beast: Tsukiko's Curse (Blu-ray)