In an early announcement to retailers, Shriek Show is working on 'Dracula vs. Frankenstein' for Blu-ray on December 13.

With a sudden slash of an axe, a woman named Joan is decapitated on a desolate beach at midnight. In a hellish laboratory hidden below the boardwalk Freak Emporium, Dr. Durea (a.k.a. Dr. Frankenstein!) drains the blood of corpses to distill an all-powerful serum. Count Dracula craves the new serum and offers the doctor the hulking body of the original Frankenstein monster in exchange. With a blast of spine-tingling electricity they shock the monster to life and send him on a killing spree for fresh victims. Joan s sister sets out to find her missing sibling and becomes a hostage in Dr. Durea s torture chamber. In her efforts to escape, she falls into Dracula's clutches and witnesses the monster mash of the millennium as the Frankenstein monster and Count Dracula clash in a gut-wrenching, limb-ripping, gruesome brawl to the bloody end.

You can find the latest specs for 'Dracula vs. Frankenstein' linked from our Blu-ray Release Schedule, where it is indexed under December 13. 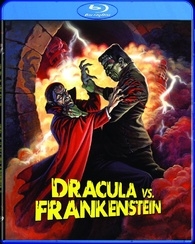