The Showtime series will arrive on Blu-ray in November.

In an early announcement to retailers, Showtime is preparing 'Billions: Season One' for Blu-ray on November 8.

Paul Giamatti and Damian Lewis star in a complex drama about power politics in the world of New York high finance. Shrewd, savvy U.S. Attorney Chuck Rhoades (Giamatti) and the brilliant, ambitious hedge fund king Bobby "Axe" Axelrod (Lewis) are on an explosive collision course, with each using all of his considerable smarts, power and influence to outmaneuver the other. The stakes are in the billions in this timely, provocative series.

You can find the latest specs for 'Billions: Season One' linked from our Blu-ray Release Schedule, where it's indexed under November 8. 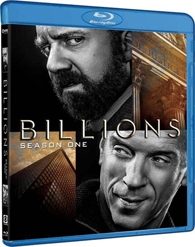 Discs mentioned in this article: (Click for specs and reviews)
Billions: Season One (Blu-ray)