Two months after the release of the Twin Peaks Blu-ray set, the mystery continues... David Lynch will be directing nine more episodes of his fan-favorite series for Showtime.

The series will once again be created by Lynch and Mark Frost and will be set 25 years later. Kyle MacLachlan is also reported to be on board to return as FBI Agent Dale Cooper.

The groundbreaking television phenomenon, Golden Globe and Peabody Award-winner Twin Peaks will return as a new limited series on Showtime in 2016. Series creators and executive producers David Lynch and Mark Frost will write and produce all nine episodes of the limited series, and Lynch will direct every episode. Set in the present day, Twin Peaks will continue the lore of the original series, providing long-awaited answers and a satisfying conclusion for the series' passionate fan base. 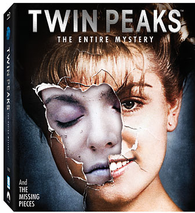