William A. Fraker's 'The Legend of the Lone Ranger' Set for Blu-ray

The legendary hero will ride again on Blu-ray in July, and you can pre-order the movie here.

In an early announcement to retailers, Shout Factory is preparing 'The Legend of the Lone Ranger' for Blu-ray on July 14.

The untold story of the man behind the mask comes to life in The Legend Of The Lone Ranger. When the ruthless bandit Butch Cavendish (Christopher Lloyd) ambushes a team of Texas Rangers and leaves them for dead, only John Reid (Klinton Spilsbury) survives. Enlisting the help of his childhood friend Tonto (Michael Horse) and donning a mask, Reid saddles up a fiery horse with the speed of light, a cloud of dust and a mighty Hi-Yo, Silver—and one of America's most beloved and enduring symbols of justice is born.

Specs have not been detailed yet, but supplements will include a Theatrical Trailer.

You can find the latest specs for 'The Legend of the Lone Ranger' linked from our Blu-ray Release Schedule, where it's indexed under July 14. 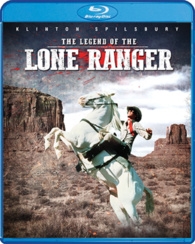 Discs mentioned in this article: (Click for specs and reviews)
The Legend of the Lone Ranger (Blu-ray)