The 1984 cult classic set to arrive on Blu-ray this spring has now been fully detailed.

As previously reported, Shout Factory is preparing 'Streets of Fire: Collector's Edition' for Blu-ray sometime in May, and now the date has been set for May 16.

This cult hit features a razor-sharp cast and original songs written by Stevie Nicks, Tom Petty and Ry Cooder and performed by such greats as The Blasters and The Fixx. Streets of Fire is a rock & roll shotgun blast to the senses.

You can find the latest specs for 'Streets of Fire: Collector's Edition' linked from our Blu-ray Release Schedule, where it is indexed under May 16. 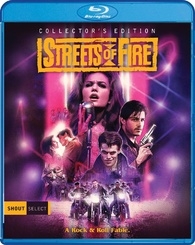