Volker Schlöndorff's 'Death of a Salesman' Dated for Blu-ray

The 1985 adaptation of Arthur Miller's classic starring Dustin Hoffman and John Malkovich is headed for Blu-ray in November.

In an early announcement to retailers, Shout Factory will be releasing 'Death of a Salesman' on Blu-ray on November 15.

During the post-war boom period of the late '40s, Willy Loman is an aging, traveling salesman, who despairs that his life his been lived in vain. Facing dispensability and insignificance in a heated, youthful economy, Willy is not ready to part with his cherished fantasies of an America that admires him for personable triumphs in the marketplace. But the reality is far more difficult than that, and the measure of Willy's self-delusion and contradictions is found in his two sons. One, Harold, is a ne'er-do-well gliding on inherited hot air and repressed feelings, and the other, Biff, a mousy, retiring sort unable to reconcile the difference between his father's desperate impersonation of success and the truth.

Specs and supplements haven't been revealed yet, but the suggested list price for the Blu-ray is $34.93.

You can find the latest specs for 'Death of a Salesman' linked from our Blu-ray Release Schedule, where it is indexed under November 15. 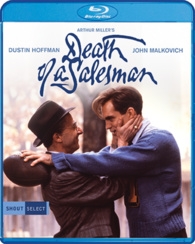