As previously reported, Shout Factory will be releasing 'Thunderbirds: The Compete Series' on Blu-ray on June 9.

The SUPERMARIONATION cult television classic leaps into the stratosphere of fun and excitement with Thunderbirds: The Complete Series! Operating from a top-secret island base in the year 2065, the team at International Rescue- intrepid Jeff Tracy and his valiant sons Scott, John, Virgil, Gordon, and Adam- engage in a never-ending humanitarian crusade to protect the innocent. Traveling via land, sea, air, and space in their fantastically advanced vehicles, the Tracys take on the most impossible of missions with courage, honor…and their greatest strength of all: the power of family.

Specs have yet to be revealed, but supplements will include Launching Thunderbirds Documentary and Vintage Thunderbirds Publicity Brochure (BD-ROM).

You can find the latest specs for 'Thunderbirds: The Compete Series' linked from our Blu-ray Release Schedule, where it's indexed under June 9. 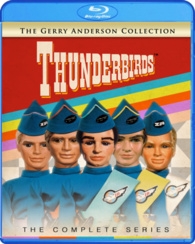