The animated feature will be available in a Blu-ray 3D combo pack this summer.

In an early announcement to retailers, Shout Factory will be releasing 'The Seventh Dwarf' on Blu-ray on August 18.

Join all seven dwarfs for an adventure as big as they are small! It’s the eve of Princess Rose’s 18th birthday. Everyone in the kingdom has come to Fantabularasa Castle to celebrate including Snow White, the Seven Dwarfs, Cinderella and Red Riding Hood. But just before the stroke of midnight Bobo, the youngest dwarf, accidentally pricks the finger of Princess Rose (a.k.a. Sleeping Beauty) with a cursed needle and sends the kingdom into a century-long slumber! To find Rose’s true love Jack to save her with a kiss, Bobo and the other six dwarfs must go on a treacherous journey, face a fiery dragon and outwit the jealous, scheming and evil witch, Dellamorta!

The Blu-ray 3D Combo Pack allows viewers to enjoy THE SEVENTH DWARF on the platform of their choice and includes spectacular movie presentation on Blu-ray 3D and 2D, DVD and a digital copy of the movie. Enhancing both editions of the film are sing-alongs, character profiles and a downloadable Royal Birthday invitation as bonus features.

You can find the latest specs for 'The Seventh Dwarf' linked from our Blu-ray Release Schedule, where it's indexed under August 18. 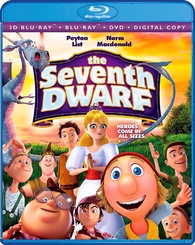