The international smash hit will be buzzing to Blu-ray 3D in May.

In an early announcement to retailers, Shout Factory is set to release 'Maya the Bee Movie - 3D' on Blu-ray on May 19.

Maya is a little bee with a big heart. She dreams of an exciting life of freedom, fun and adventure – the world is simply far too interesting to stay inside a hive! Her funny attempts to fit in bring her into trouble with the Queen’s narrow-minded royal advisor, Buzzlina. With her best friend Willy, Maya buzzes out into the meadow on an exhilarating adventure of self-discovery.

While most bees believe that other insects should be feared, Maya can’t help but make friends with Flip the charismatic and eccentric grasshopper, Kurt the dung beetle and even Sting, a young hornet. But when the Queen’s royal jelly is stolen, it will take Maya and all of her bug buddies to figure out who did it and how to save the day!

Already a great box office success in much of the world, “MAYA THE BEE MOVIE,” based on the well-known children’s novel and popular animated series in Europe, Australia and Asia, offers an immersive cinematic adventure into a spectacular macroscopic world. This highly anticipated animated feature brings to life an enchanting story of a little bee named Maya and her exciting adventure of self-discovery and fantastical fun. A must-have for fans of all ages, “MAYA THE BEE MOVIE” is an instant classic that delivers wholesome family entertainment— emphasizing the importance of friendship, freedom and courage. This internationally acclaimed film can also be seen in select theaters in Los Angeles and New York on May 1, 2015.

The Blu-ray 3D/Blu-ray/DVD/Digital Copy combo pack will feature 1080p video, lossless 5.1 audio, and supplements include: “Dancing With Bees” – An Exclusive Episode Of The Maya The Bee TV Series, An Interview with Maya, Blooper Reel, and Trailers.

You can find the latest specs for 'Maya the Bee Movie - 3D' linked from our Blu-ray Release Schedule, where it is indexed under May 19. 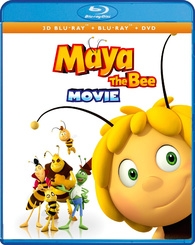