The 1984 sci-fi comedy is planned for Blu-ray in August.

In an early announcement to retailers, Shout Factory says 'The Adventures of Buckaroo Banzai Across the 8th Dimension Collector's Edition' will be available on Blu-ray on August 16.

Expect the unexpected… he does. Neurosurgeon. Physicist. Rock Star. Hero. Buckaroo Banzai (Peter Weller, Robocop) is a true 80s renaissance man. With the help of his uniquely qualified team, The Hong Kong Cavaliers, Buckaroo is ready to save the world on a moment's notice. But after his successful test of the Oscillation Overthruster – a device that allows him to travel through solid matter – he unleashes the threat of "evil, pure and simple from the 8th Dimension"… the alien Red Lectroids.

Led by the deranged dictator Lord John Whorfin (John Lithgow), the Lectroids steal the Overthruster with the intent of using it to return to their home of Planet 10 "real soon!" But no matter where you go, there Buckaroo Banzai is… ready to battle an interdimensional menace that could spell doom for the human race.

How can Buckaroo stop the Lectroids' fiendish plots? Who is the mysterious Penny Priddy? Why is there a watermelon there? For the answers to these and other questions, you have to watch The Adventures of Buckaroo Banzai, monkey boy!

Specs have yet to be revealed, but supplements include: NEW Into The 8th Dimension – A Two-Hour Retrospective Documentary including brand-new interviews with cast and crew; NEW Audio Commentary with Michael and Denise Okuda; Audio Commentary with Director W.D. Richter and Writer Earl Mac Rauch; Buckaroo Banzai Declassified Featurette; Deleted Scenes (including the Alternate Opening with Jamie Lee Curtis); New Jet Car Trailer; and Theatrical Trailer.

You can find the latest specs for 'The Adventures of Buckaroo Banzai Across the 8th Dimension Collector's Edition' linked from our Blu-ray Release Schedule, where it is indexed under August 16. 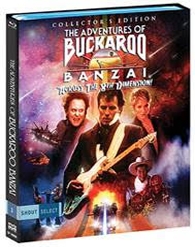