Two cult sci-fi horror flicks will terrorize Blu-ray in June, and you can pre-order the movies now.

In an early announcement to retailers, Shout Factory is preparing 'Tentacles / Reptilicus' for Blu-ray on June 16.

'Reptilicus' - When the accidentally thawed tail of a huge prehistoric monster is discovered, the process of regeneration begins growing into a full-sized monster...which attacks the city.

'Tentacles' - A prehistoric octopus of monstrous proportions, stirred from its sleep in the North Sea by underwater explosions, migrates to the U.S. Gulf Coast and menaces a seaside community. A scientist turns his trained killer whales against the octopus, and the giant sea creatures battle to the death.

You can find the latest specs for 'Tentacles / Reptilicus' linked from our Blu-ray Release Schedule, where it's indexed under June 16. 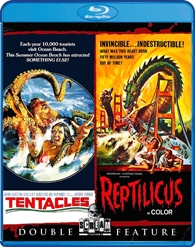 Discs mentioned in this article: (Click for specs and reviews)
Tentacles / Reptilicus (Blu-ray)