In an early announcement to retailers, Shout Factory is working on 'T.A.M.I. Show / The Big T.N.T. Show: Collector's Edition' for Blu-ray on December 2.

The Big T.N.T. Show was filmed in Los Angeles in November of 1965 and stars some of the biggest acts of the day, including many future Rock and Roll Hall of Fame members, performing their best material. The Byrds, in their original line-up of Gene Clark, David Crosby, Chris Hillman, Michael Clarke, and Roger McGuinn, perform two # 1 hits, “Mr. Tambourine Man” and “Turn! Turn! Turn! (To Everything There Is A Season).” Ray Charles gives a rousing performance of “What’d I Say” and “Let the Good Times Roll.” A sultry performance by The Ronettes on “Be My Baby” is met with impassioned screams from the audience; The Lovin’ Spoonful perform their Top 10 hits “Do You Believe in Magic?” and “You Didn’t Have to Be So Nice”; and Bo Diddley fires up the crowd with “Bo Diddley” and “Hey, Bo Diddley.” To close the show, The Ike & Tina Turner Revue give an electrifying performance, including “I Think It’s Going to Work Out Fine” and “A Fool in Love.”

Also on the stage that evening was Petula Clark, performing her No. 1 hit “Downtown”; Roger Miller, playing his biggest hit, “King of the Road”; Donovan, opening his set with Buffy Sainte-Marie’s “Universal Soldier”; and the reigning queen of folk, Joan Baez, reflecting the continuing popularity of the genre as the Vietnam War escalated.

Performing to the side of the stage in between acts, but not seen in the film, was the Modern Folk Quartet. Made up of future luminaries - songwriter/producer Chip Douglas, Lovin’ Spoonful member Jerry Yester, famous rock photographer Henry Diltz, and songwriter/musician Cyrus Faryar, with session player “Fast” Eddie Hoh on drums, the band closed the evening with the show’s Harry Nilsson-composed theme song “This Could Be The Night.”

Originally billed as a companion piece to the T.A.M.I. Show after that show’s success, The Big T.N.T. Show holds up as an essential time capsule from its day. Phil Spector was on board to help produce, to serve as the on-screen music director, and to play piano for Baez’s rendition of The Righteous Brothers’ “You’ve Lost That Loving Feeling.” David McCallum, a rising star appearing in the new TV series The Man From U.N.C.L.E., was tapped to emcee. Filmed at what was then the Moulin Rouge nightclub on Sunset, footage also includes shots of the Los Angeles haunts Chateau Marmont, Ben Frank’s coffee shop, and fleeting hot spot The Trip nightclub.

One of the most acclaimed rock events ever captured on film, the 1964 concert known as T.A.M.I. Show also featured performances by several future Rock and Roll Hall of Famers. In a lineup like no other, the Rolling Stones, James Brown, the Beach Boys, Marvin Gaye, Smokey Robinson & The Miracles, the Supremes, Chuck Berry, Lesley Gore and others took the stage one after another on October 29 at the Santa Monica Civic Auditorium.

Aside from the five rock groups, all the performers were backed by a band that we've come to know as the Wrecking Crew, famed for playing on Phil Spector-produced hits, Beach Boys albums and much more, with future stars Glen Campbell and Leon Russell, among others. Fanita James, Jean King, and future solo star Darlene Love, billed as The Blossoms, provided backing vocals.

Mastered from a new High-Definition transfer, The T.A.M.I. Show / The Big T.N.T. Show Collector's Edition brings both of these history-making films to life in a definitive set that no fan or scholar of rock and soul music will want to be without.

Specs have yet to be revealed, but supplements include: Interview with T.A.M.I. Show director Steve Binder; New interviews with The Big T.N.T. Show performers Petula Clark, Henry Diltz and John Sebastian; Commentary by T.A.M.I. Show director Steve Binder; and a 36-page booklet featuring detailed essays by Don Waller and rare photos and memorabilia.

You can find the latest specs for 'T.A.M.I. Show / The Big T.N.T. Show: Collector's Edition' linked from our Blu-ray Release Schedule, where it is indexed under December 2. 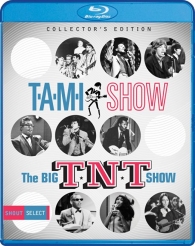