Four horror flicks are set to terrorize Blu-ray in October.

As previously reported, Shout Factory is preparing 'The Larry Fessenden Collection' for Blu-ray, and now the date has been set for October 20. The four film package will include 'No Telling,' 'Habit,' 'Wendigo,' and 'The Last Winter.'

'No Telling' - Offers a compelling twist on the "don't mess with Mother Nature" theme familiar to fans of sci-fi and horror films. When Lillian Gaines moves to the country with her medical researcher husband Geoffrey for a quiet summer retreat, she never suspects that meeting activist Alex Vine will force her to confront her deepest fears about the man she married, and the bizarre experiments under way in his lab.

'Habit' - It's autumn in New York. Sam has broken up with his girlfriend and his father has recently died. World-weary and sloppy drunk, he finds temporary solace in the arms of Anna, a mysterious vampire who draws him away from his friends and into a web of addiction and madness.

'Wendigo' - As Kim and George (Patricia Clarkson and Jake Weber) and their son Miles (Erik Per Sullivan) drive to the Catskills to spend a weekend away, they accidentally hit a deer and are run off the road. But what seems to be a mere occurrence of misfortune marks the beginning of a terrifying journey, where myth becomes reality and an evil spirit, half man and half animal, haunts a small town...

'The Last Winter' - A team in Alaska is tormented by an unseen evil. After one crewmember is found dead, disorientation slowly claims the sanity of the other team members as each of them succumbs to an unknown fear.

Specs, supplements, and a suggested list price have not been announced yet.

The most complete retrospective of the filmmaker’s work to date, the set also boasts a bevy of bonus content, including a 24 page booklet with liner notes by Fangoria’s Michael Gingold that includes never-before-seen photos; storyboards and sketches; new audio commentaries with Larry Fessenden, Patricia Clarkson, Jake Weber and John Speredakos; a new interview with Larry Fessenden; making-of featurettes for No Telling, Habit and The Last Winter; Fessenden’s short films, including the rarities White Trash and Santa Claws; Fessenden’s music videos Save You from Yourself, Frankenstein Cannot be Stopped and Tired of Killing Myself; the feature-length documentary The Making of ‘The Last Winter’; behind the scenes featuettes; archival footage and much more.

The first three hundred fans who pre-order their copies from ShoutFactory.com will have their slipcase signed by Larry Fessenden.

You can find the latest specs for 'The Larry Fessenden Collection' linked from our Blu-ray Release Schedule, where it's indexed under October 20. 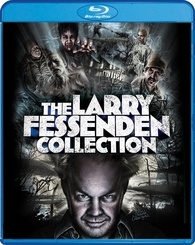