The animated family film is heading to Blu-ray in June.

In an early announcement to retailers, Shout Factory is preparing 'Quackerz' for Blu-ray on June 14.

When the peaceful island of the Mandarin Ducks is mistakenly invaded by the Military Mallards, a conflict flares up between the Mandarin Emperor and the Mallard Commander. Longway, the Emperor's son, and Erica, the daughter of the Mallard Commander, meet… and before long, a friendship takes wing. While their feathered fathers fight and egg each other on, the wicked Ms. Knout is con-duck-ting a scheme to destroy the sun. The kids will have to get all their ducks in a row to battle their foe… but waddle they do if her foul plan succeeds? Come journey with us through this wondrous movie adventure that is filled with wholesome values, universal appeal and laugh-out-loud fun for the family. QUACKERZ emphasizes the importance of family, friendship, teamwork, respect, and acts of generosity and kindness.

Specs have not been detailed yet, but supplements will include: Behind-the-scene footage and Animatics.

You can find the latest specs for 'Quackerz' linked from our Blu-ray Release Schedule, where it's indexed under June 14. 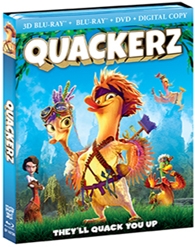 Discs mentioned in this article: (Click for specs and reviews)
Quackerz - 3D (Blu-ray)