The horror film starring Dominique Swain and Traci Lords is headed for Blu-ray in May.

In an early announcement to retailers, Shout Factory will be releasing 'Sharkansas Women's Prison Massacre' on Blu-ray on May 3.

When a fracking mishap accidentally rips apart the earth's crust, the resulting hole opens up a gaping underground waterway leading to a vast and mysterious subterranean ocean somewhere deep below. Instantly, giant prehistoric sharks begin wending their way upward toward a murky bog in the heart of the Arkansas bayou. Unfortunately for a group of female prisoners on a work detail in the swamp, the deadly sharks attack without warning – pinning a hapless group of potential victims in a small deserted cabin in the heart of the wetlands. For these wayward women, death may be the only means of escape!

Get ready for a wild ride when Dominque Swain (Skin Traffik, Alpha Dog) and Traci Lords (Cry Baby, Not of this Earth) come face to face with the deadliest prehistoric man-eaters nature has ever spawned.

You can find the latest specs for 'Sharkansas Women's Prison Massacre' linked from our Blu-ray Release Schedule, where it's indexed under May 3. 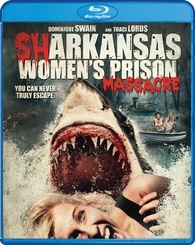