The 1977 thriller starring George Segal and Henry Fonda is planned for Blu-ray in June.

As previously reported, Shout Factory revealed 'Rollercoaster' will be coming to Blu-ray this summer, and now the date has been set for June 21.

Thrills abound in this high-speed suspense yarn as Timothy Bottoms, a determined terrorist, begins to turn America's amusement parks into battlefields. The tension mounts as affable safety inspector George Segal attempts to track down the saboteur who as targeted the country's most popular rollercoaster, and its riders, for senseless destruction. The edge-of-the-seat excitement mounts as the battle of wits between Segal and Bottoms builds to an explosive climax. Co-starring Richard Widmark and Henry Fonda, the Jennings Lang production takes viewers on an unforgettable trip filled with sense-shattering twists and hairpin turns.

Specs have yet to be revealed, but the release will includes the original SENSURROUND soundtrack; NEW Interview with associate producer/writer Tommy Cook (12 minutes); Still Gallery; Radio Spots; and Theatrical Trailer.

You can find the latest specs for 'Rollercoaster' linked from our Blu-ray Release Schedule, where it is indexed under June 21. 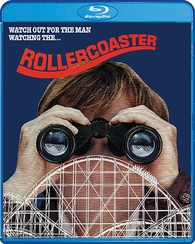