In an early announcement to retailers, Shout Factory says 'Death Becomes Her: Collector's Edition' will hit on Blu-ray on April 26.

Two narcissistic arch rivals (Streep and Hawn) discover the ultimate accessory – a potion that will keep them forever young – when they meet a mysterious enchantress (Isabella Rossellini, Blue Velvet) with deep ties to the Hollywood elite. But they get more than they bargained for when their newfound beauty only intensifies their vanity – and rivalry – in this fast-paced and very funny dark comedy that the Chicago Tribune calls "diabolically inventive."

You can find the latest specs for 'Death Becomes Her: Collector's Edition' linked from our Blu-ray Release Schedule, where it is indexed under April 26. 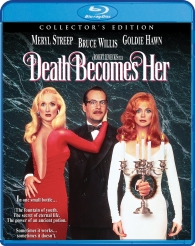