The horror flick will terrorize Blu-ray in August, and you can pre-order the disc here.

In an early announcement to retailers, Shout Factory is preparing 'The Legacy' for Blu-ray on August 25.

How far would you go to inherit everlasting life? When an American couple (Katharine Ross and Sam Elliott) have a mysterious car accident in the English countryside, the other driver offers to take them to his lavish country estate to make amends. But once there, the suspense deepens when they learn the other houseguests are expecting them! It's not long before the couple's fear turns to terror when the guests (including rock superstar Roger Daltrey) begin dying in unspeakable ways. Now it's clear the true master of the house is a supernatural force that will stop at nothing to find the rightful heirs for an unimaginably horrible legacy.

You can find the latest specs for 'The Legacy' linked from our Blu-ray Release Schedule, where it's indexed under August 25. 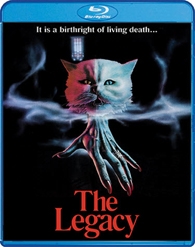 Discs mentioned in this article: (Click for specs and reviews)
The Legacy (Blu-ray)