John Milius' 1984 action film will be getting a Collector's Edition Blu-ray next year.

As previously reported, Shout Factory says 'Red Dawn: Collector's Edition' will be available on Blu-ray in 2017, and now the date has been set for March 14.

When communist paratroopers descend on a high school football field in Colorado, a group of the school's students wages an all-out guerrilla war to save their town -- and their country! An all-star cast, including Patrick Swayze, Charlie Sheen and Harry Dean Stanton, delivers powerful performances in this gripping story of courage and patriotism. Cinematography by Ric Waite (Cobra, 48 Hrs.).

You can find the latest specs for 'Red Dawn: Collector's Edition' linked from our Blu-ray Release Schedule, where it is indexed under March 14. 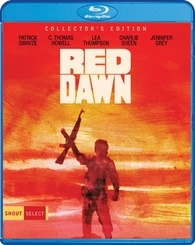