'On Golden Pond' Heading to Blu-ray in January

The classic 1981 drama heads to Blu-ray in January. Pre-order the Blu-ray here.

In an early announcement to retailers, Shout Factory is working on 'On Golden Pond' for Blu-ray on January 20.

An aging couple, Ethel and Norman Thayer, spends each summer at their home on a lake called Golden Pond. They are visited by daughter Chelsea, who is somewhat estranged from her curmudgeon of a father. Chelsea introduces them to her new fiance, Bill, and asks the Thayers to permit Bill's young son Billy to stay with them while she and Bill have some time to themselves. The boy is annoyed by being left with elderly strangers with no friends nearby and nothing to do. He resents Norman's brusque manner at first, but eventually comes to enjoy their Golden Pond fishing adventures together. Chelsea returns, a little exasperated and envious of the fact that Norman seemingly has bonded with a stranger's child in a way he never quite did with her.

You can find the latest specs for 'On Golden Pond' linked from our Blu-ray Release Schedule, where it is indexed under December 16. 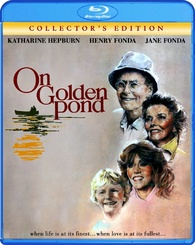