The classic crime comedy starring Robert De Niro and Charles Grodin is getting a Collector's Edition Blu-ray in February.

In an early announcement to retailers, Shout Factory will be releasing 'Midnight Run: Collector's Edition' on Blu-ray on February 23.

Jack Walsh (Robert De Niro) is a tough ex-cop turned bounty hunter. Jonathan "The Duke" Mardukas (Charles Grodin) is a sensitive accountant who embezzled $15 million from the Mob, gave it to charity and then jumped bail. Jack's in for a cool $100,000 if he can deliver The Duke from New York to L.A. on time. And alive. Sounds like just another Midnight Run (a piece of cake in bounty hunter slang), but it turns into a cross-country chase. The FBI is after The Duke to testify - the Mob is after him for revenge - and Walsh is after him to just shut up. If someone else doesn't do the job, the two unlikely partners may end up killing each other.

You can find the latest specs for 'Midnight Run: Collector's Edition' linked from our Blu-ray Release Schedule, where it is indexed under February 23. 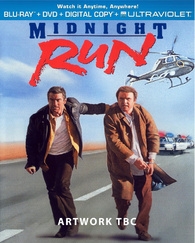