The intense crime thriller is planned for a November Blu-ray release.

In an early announcement to retailers, Shout Factory says 'Carnage Park' will be available on Blu-ray on November 1.

This pure-pulp thrill ride jumps between past and present as it pieces together the puzzle of a shocking crime. It's 1978 and a bank robbery gone wrong leaves Vivian (The Last Exorcism's Ashley Bell) the hostage of two criminals on the run. But things go from bad to off-the-rails berserk when she and her captors wind up on the sun-baked desert outpost of a deranged ex-military sniper (Pat Healy), who ensnares them in his deadly game of cat and mouse. Rising horror auteur Mickey Keating (Pod, Darling) directs this gritty, grisly homage to the glory days of grindhouse cinema.

You can find the latest specs for 'Carnage Park' linked from our Blu-ray Release Schedule, where it is indexed under September 6. 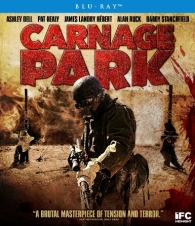