The acclaimed fantasy horror film is headed for Blu-ray in September.

In an early announcement to retailers, Shout Factory is working on 'Tale of Tales' for Blu-ray on September 6.

In the kingdom of Longtrellis, the King (John C. Reilly) and his Queen (Salma Hayek) attempt to conceive a child through very unusual means. Meanwhile, in Highhills, the none-too-bright monarch (Toby Jones) marries his daughter off to a brutal ogre while developing a strange obsession with breeding a giant flea. At the same time, the sex-obsessed ruler of Strongcliff (Vincent Cassel) is in for a shock when the woman with whom he falls in love is not quite what she seems.

specs have yet to be revealed, but supplements include: The Making of Tale of Tales and a Theatrical Trailer.

You can find the latest specs for 'Tale of Tales' linked from our Blu-ray Release Schedule, where it is indexed under September 6. 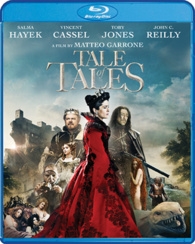