The legendary movie star is the focus of this documentary hitting Blu-ray in April. Pre-orders are now live.

In an early announcement to retailers, Shout Factory is preparing 'I Am Steve McQueen' for Blu-ray on April 14.

Steve McQueen will forever be recognized as one of Hollywood's most iconic movie stars. His rugged good looks, bad-boy sexuality and searing charisma set him apart as he grew from a small-town rebel to become the highest paid and most sought-after actor of his generation. He was notorious for challenging authority and lived life for himself. Nicknamed the "king of cool", his volatile yet endearing anti-hero persona was as much a part of who he really was as an individual as the characters he portrayed on-screen. Combining extensive original interviews, including rare interviews with Steve McQueen himself, the best of Steve's major motion pictures and archival footage, the film chronicles McQueen's extraordinary career while focusing on the correlation between his on-screen and off-screen experiences. 'I Am Steve McQueen' tells the incredible life story of this legendary actor, racer and cultural icon. The film features McQueen's family and friends and an all-star cast including Gary Oldman, Pierce Brosnan, Marisa Miller, Ali MacGraw, Robert Vaughn, Randy Couture, Zoe Bell, Kristin Kreuk and Ben Mankiewicz and narration by Robert Downey Jr.

Specs have not been detailed yet, but supplements will include: McQueen's Cars, Planes And Motorcycles; The Yucatan – McQueen's Passion Project; and Trailer.

You can find the latest specs for 'I Am Steve McQueen' linked from our Blu-ray Release Schedule, where it's indexed under April 14. 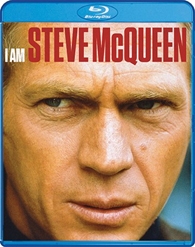 Discs mentioned in this article: (Click for specs and reviews)
I Am Steve McQueen (Blu-ray)