The crime film is speeding toward Blu-ray in May, and you can pre-order the movie now.

As previously reported, Shout Factory is preparing 'Harley Davidson And The Marlboro Man' for Blu-ray on May 19.

"Hotly staged bike chases" (Variety), state-of-the-art weaponry and "excellent explosions" (Hollywood Drama-Logue) form a deadly combination in this "lively" (Los Angeles Times) action film about a couple of modern-day, motorcycle-ridin' Robin Hoods. Starring Mickey Rourke (Get Carter), Don Johnson (Tin Cup) and Vanessa L. Williams (Shaft), Harley Davidson and the Marlboro Man contains thrills and excitement that never let upwith surprise twists at every turn! In the lawless world of the future, drifters Harley Davidson (Rourke) and The Marlboro Man (Johnson) help an old friend save his bar by robbing the very bank trying to takeover his property. But this is no ordinary bank and the armored car they roll is filled not with moneybut drugs! Now Harley and Marlboro become the objects of a ruthless manhunt by the corrupt bank chief's deadly and unstoppable henchmen.

Specs have not been detailed yet, but supplements include a vintage featurette and a theatrical trailer.

You can find the latest specs for 'Harley Davidson And The Marlboro Man' linked from our Blu-ray Release Schedule, where it's indexed under May 19. 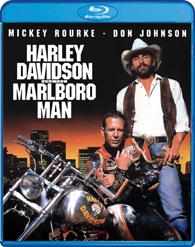